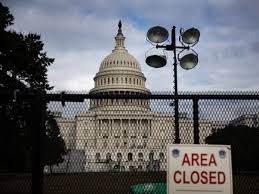 One of the protesters caught up in the Jan. 6, 2021, events at the U.S. Capitol – a man who has not yet been convicted of anything – has unleashed on the federal government during a telephone interview with The Gateway Pundit.

It is Andrew Taake, 33, of Houston, who said in the interview that he'll take punishment if it's something he deserves.

But he wants those who were on the other side – the side of the government – who violated the law to face their punishments, too.

"I have said since day one, I will stand for my JUST punishment with my head held high, as long as the officer who sprayed me with pepper spray as soon as I walked up near the building smiling and holding my hands up empty gets his due justice. Same for the baton wielding, boot stomping officer who mangled my hand so badly, that I now am faced with having half my ring finger amputated as it is too far gone to ever repair. What about officer Lila Morris who murdered Roseanne Boyland, by beating her relentlessly in the head with a baton (as seen on her own body camera footage I personally have watched), or Lt. Michael Byrd who shot Ashli Babbitt in cold blooded murder? What of the officer I watched time concussion grenades to explode right by peoples' heads, of which two other protesters were killed, and then lied about saying they died of 'natural causes'? When do the people murdered at the hands of Nancy Pelosi's Stormtroopers get any justice?"