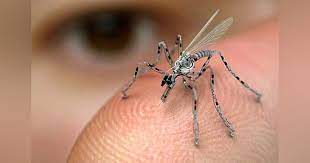 Insane, they are coming up with one bad idea after another and barking orders at us, mad shine in their eyes and saliva coming out of their mouths. They are crazy — and in charge of institutions, schools, newspapers and armies.

Project "Insect Allies"
You may think that you have seen it all but here is a great idea. Take some insects, infect them with a genetically modified virus designed to genetically edit mature plants in real time, and release them. Release them into wild and repeat, "it's safe and effective."

Sweet idea, right? Well, DARPA thought so, and so in 2016, they started a project called "Insect Allies" that is designed to do that. (This is a different project from Oxitec's controversial release of GM mosquitos.) DARPA's official story is that in the name of national security, a good way to protect the American crops from potential threats is to genetically modify them using GM viruses as genetic modifiers and insects as flying syringes. And that they just need to test it!