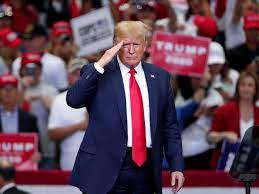 Former President Donald Trump and his team have been huddling together at his Mar-a-Lago estate in Florida for the better part of a year plotting how he plans to return to the White House in 2024.

After handily winning the GOP nomination, which he will if he runs — and we believe he is going to run — Trump will once again fall under major attack by the far-left media propagandists and deep state, all of whom will go to extreme lengths to keep him out of the Oval Office because they are petrified of his 'America First' agenda, which empowers citizens and strips power from the governing elite.

But in addition to these plans, Trump made a pledge this week to former U.S. military members discharged because they refused to take the problematic, largely still experimental, and often dangerous COVID-19 vaccine.

Namely, Trump plans to reinstate those "patriots" and more.

"We have to abolish all COVID mandates and lockdowns," Trump told the Turning Point USA conference in Tampa, Fla., on Saturday. "Rehire every patriot who was shamefully fired from the military, with an apology — we have to give them an apology. And all of their back pay."