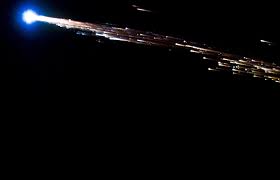 On July 24, China's Long March 5B rocket delivered the Wentian laboratory module to the new space station. The rocket's 23-ton main stage had since been in an uncontrolled descent and reentered the Earth's atmosphere over the Indian Ocean at around 2445 ET, the U.S. Space Command tweeted.

"No other country leaves these 20-ton things in orbit to reenter in an uncontrolled way," Jonathan McDowell, an astrophysicist at the Harvard-Smithsonian Center for Astrophysics, told CNN before the rocket burned up in the atmosphere.

"The People's Republic of China did not share specific trajectory information as their Long March 5B rocket fell back to Earth. All spacefaring nations should follow established best practices, and do their part to share this type of information in advance to allow," Nelson tweeted.

This is the third Long March 5B launch (we noted the other two here) where the core rocket has tumbled uncontrollably back to Earth. The first was in May 2020, when a Long March 5B deorbited and crashed into an African village.