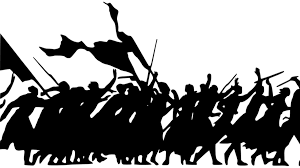 Two major revolutions followed the ideas of the Enlightenment.  One, the American, seemingly a mostly successful one for human liberty, offered a system which didn't last even one hundred years – and, in reality, not even that given the founding generation's proclivities of violating their own Constitution.

The other, French.  Unlike the American, there really is nothing good to be said for this one.  Of course, not that there was no cause for which to revolt.  And on one level, this is what Strickland examines here.  On a deeper level, which is the larger theme for Strickland in this third book of his four-part series, there is the divorce from God.  But in Strickland's case, it is deeper still – a divorce from God and Christianity as understood by the universal Church until the eleventh century.

As it has been some time since I have commented on this book, a brief but relevant comment.  I have not yet found Strickland's larger view convincing.  I am not speaking of the religious context, the doctrinal and theological differences that divided the eastern and western church.  I am considering the governance structures that came out of each – and how these would inform a healthy individual liberty.

In the West, and despite what many claim, there was a constant tension between Church and king.  Neither had complete authority over the other.  In this space, individuals who felt wronged by one could always appeal to the other.

Certainly, each side would try to assume more authority, and the balance would shift often one way or the other.  But until after the Reformation, such a monopoly was never achieved.  It is for this reason that I find no reason to identify as a state any governance entity prior to the Peace of Augsburg in 1555 or, perhaps, even the Peace of Westphalia in 1648.  There was no monopoly until these treaties, hence no "state" as we use the term.