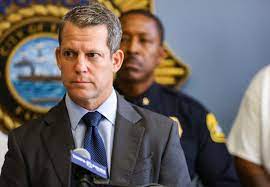 After the lawlessness that has been documented throughout many major cities across the United States over the last couple of years, including by The Gateway Pundit, Ron DeSantis took the initiative earlier this year of asking staff to ensure it would not happen in the State of Florida.  They were tasked with speaking with "law enforcement and line prosecutors throughout the state".  According to Governor DeSantis, it all led back to the 13th Judicial Circuit in Hillsboro County, where law enforcement has been frustrated by criminals being let go and crimes not being prosecuted.

Gov. DeSantis stated, "We've seen across this country over the last few years, individual prosecutors take it upon themselves to determine which laws they like and will enforce, and which laws they don't like and won't enforce. The results of this in cities like Los Angeles and San Francisco have been catastrophic.  You can go in [a store] in San Francisco and steal a certain amount of merchandise and by definition you would not be prosecuted…"

Gov. DeSantis continued: "Those who say this represents social justice, look at San Francisco.  They had to recall this prosecutor who was funded by people like George Soros, saying he's not going to prosecute.  They did the recall election and he was recalled, even in a very liberal jurisdiction.  But, the places that voted to keep him were the affluent communities who are not bearing the brunt of the policies.  The places that voted to recall him are the working class communities, because they bear the burden of ignorance and refusal to enforce the law."