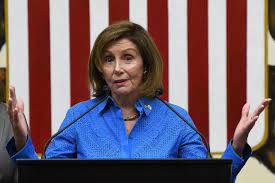 Most important among these at a moment Washington has expressed concern that "the risk of a mistake could actually lead to some sort of conflict" (in John Kirby's words Thursday) - is the cancelation of military ties.

This comes in addition to unveiling undefined sanctions against House Speaker Nancy Pelosi over the "egregious provocation" of her overnight trip to Taiwan earlier in the week, which saw China immediately respond with ongoing live fire drills which have surrounded the self-ruled island, as well as ballistic missile firings in the vicinity.

The foreign ministry said in a statement, "In disregard of China's strong opposition and serious representations, Speaker of the U.S. House of Representatives Nancy Pelosi visited China's Taiwan region," and announced the following countermeasures in response:

Suspending China-U.S. cooperation on the repatriation of illegal immigrants.