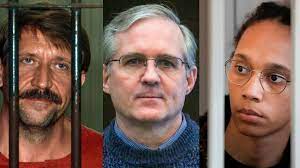 He said his government is now "ready to discuss the topic, but within the framework of the channel that has been agreed by the presidents," according to CNN. "There is a specified channel that has been agreed upon by [Russian President Vladimir Putin and US President Joe Biden], and no matter what anyone says publicly, this channel will remain in effect," the top ambassador added while attending the Association of Southeast Asian Nations summit.

Both the White House and US Speaker Nancy Pelosi on Thursday condemned the "unjust" Griner conviction and her long sentencing. She had pled with the court to "not end her life" through a harsh prison sentence. The US had her arrest, detention and sentencing a "brazen and unacceptable violations of the rule of law by Putin."

President Biden reiterated in his statement that she's been wrongfully detained. "It's unacceptable, and I call on Russia to release her immediately so she can be with her wife, loved ones, friends, and teammates," Biden stressed. "My administration will continue to work tirelessly and pursue every possible avenue to bring Brittney and Paul Whelan home safely as soon as possible."

Talking to the Wall