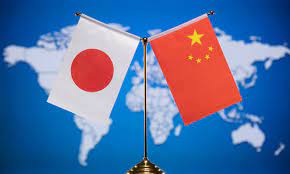 After earlier scrapping a high-level diplomatic meeting with Japan, the Chinese Communist Party (CCP) reportedly blasted the weapons into waters near Taiwan, provoking the West to potentially respond with blowback.

"This is a grave issue that concerns our country's national security and the safety of the people," Kishi is quoted as saying, adding that Tokyo has now lodged a formal diplomatic protest with the Chinese government.

It turns out that this is the first time a Chinese ballistic missile has touched down in Japanese waters – a historic move for such a time as this when, dare we say, World War III is emerging from the horizon.

China along with several other nations are not in agreement with Japan as to the extent of its exclusive economic zone. The Japanese island of Yonaguni sits about 67 miles east of Taiwan, and the nation also claims sovereignty over another patch of uninhabited islands to the northeast of Taiwan.

It is that second area that technically overlaps with China's own exclusive economic zone, as it is located in the East China Sea region.

This dispute muddies the waters a bit as China considers the blast zone to be its own, while Japan says it owns the area. The demonstration, China says, was meant to show the world that it is capable of fully blockading Taiwan – if it wanted to – which it also considers its own.