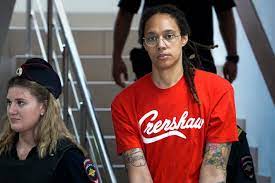 Yesterday, a Russian judge sentenced Griner to 9 years in jail. This was after she pled guilty to illegally bringing a small amount of cannabis into the country, in violation of Russia's drug laws. She faced a maximum sentence of 10 years.

U.S. officials are up in arms over the case. The U.S. State Department has classified Griner as "wrongfully detained."

Wrongfully detained? Doesn't the State Department know that she pled guilty to the offense? Is the State Department claiming that her plea was coerced? If so, then why not just come out and say that, notwithstanding the fact that there is no evidence whatsoever of a coerced plea?

The mainstream media, which has re-adopted the extreme anti-Russia animus that has long afflicted the U.S. national-security establishment, exclaims that Griner's sentence is just too long. They are saying that the long sentence shows that Griner is just a "political hostage."

Really? Well, what about all the long jail sentences for non-violent drug offenses that have been meted out to American citizens by federal judges and state judges? What about the many people who are today rotting away in jail for long periods of their lives for simply possessing or distributing drugs, including marijuana?

The Narrative That This War Was "Unprovoked" Prevents Peace