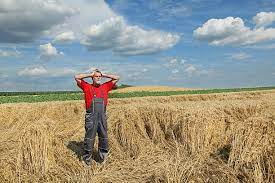 Their relentless hard work keeps us fed, but now many of them are being financially ruined by forces beyond their control.  Prices for fertilizer, farm equipment and diesel fuel have spiraled to absolutely absurd heights, and meanwhile extremely bizarre weather patterns are making it almost impossible to operate successfully in many parts of the nation.  A lot of farmers and ranchers have already gone out of business, and many more will go out of business in the months ahead unless some sort of a miracle happens.

Back in 1900, there were approximately 5.7 million family farms in the United States, but at that time the total population of the country was just 76 million.

Today, there are only about 2.2 million family farms in the United States, but the total population of the country has grown to 329 million.

Agriculture is slowly but surely being consolidated, and the big fish have far more power than the little fish do.

It has gotten to a point where it has become nearly impossible for many small farmers and ranchers to survive.  To illustrate this, I would like to share something that a farmer named Sheila Payne Blackburn recently posted on Facebook…

I am the last one left on our farm and ranch here in central Texas. It has been in our family and in our blood for over 150 years. I was raised to never back down, never give up, get back in the saddle, cowgirls don't cry, pull yourself up by your bootstraps, hang tough, and every other cowboy expression you can think of.