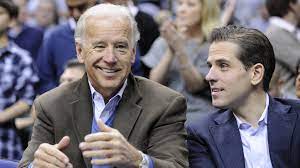 Another meeting between Joe Biden and business partners tied to the family influence-peddling operation run by his son Hunter has been discovered, further undermining the president's insistence that he never discussed the business with his son.

It's the 15th meeting uncovered between Joe Biden and businessmen linked to his son, DailyMail.com exclusively reported.

Two executives for the Chinese energy company Wanxiang met with Joe Biden in the West Wing of the White House in 2014 when Biden was vice president, according to White House visitor logs. The meeting was followed by a fawning email and invitation from the executives to Hunter Biden records reveal.

Wanxiang, a major Chinese company, formed a partnership in 2012 with a client of Hunter's company Seneca Global Advisors on a $1.25 billion natural gas plant in China.

Hunter invested in a car company, Fisker, that was later bought by Wanxiang. He purchased one of the firm's electric sports cars for $142,300.

Four days after the meeting with Joe Biden in the West Wing, one of the Chinese executives emailed Hunter offering help servicing his Fisker.