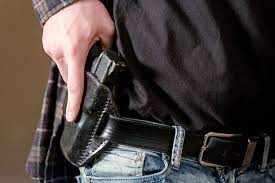 The Biden regime's full-court press against guns and the firearms industry is continuing unabated, apparently, according to a report this week from a noted, trustworthy gun industry news site.

Ammoland reports that manufacturers of handgun holsters are receiving letters from Joe Biden's Census Bureau seeking sales records, though the letters requesting the information do not specify why.

Several major holster manufacturers/providers received notices from the Department of Commerce Census Bureau requesting order numbers, product descriptions, and where the items were being shipped. A few holster companies have refused to turn over the requested information to the federal government.

"We will never turn over any information on our customers to the government no matter the cost us," Chad Myers, the president of JM4 Tactical, noted. "To do so would violate our core beliefs. We need to stand up to an overbearing government. Our customers can rest assured that their information is safe with us!"

According to the news site, every year the Census Bureau sends out a Commodity Flow Survey to random companies in order to help the federal government track the flow of commerce so as to inform policymakers when it comes to shipping and transportation. However, this year — for some reason — an unusually high number of holster companies have gotten a notice, leading some of them to speculate that Biden's regime is targeting them specifically.