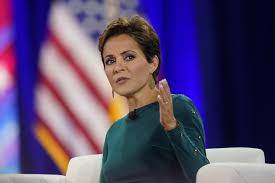 The Republican Nominee for Arizona Governor, Trump-Endorsed Kari Lake, has responded to the FBI's raid on President Trump's Mar-a-Lago, naming it "one of the darkest days in American history."

The Gateway Pundit reported that President Trump's Florida home was unexpectedly raided by the FBI, and his safe was broken into on Monday night.

"It is prosecutorial misconduct, the weaponization of the Justice System, and an attack by Radical Left Democrats who desperately don't want me to run for President in 2024," President Trump said in a statement.

This was an attack on our Country and We The People.

"This illegitimate, corrupt Regime hates America and has weaponized the entirety of the Federal Government to take down President Donald Trump," said Kari Lake.

Kari Lake is running on a platform of getting to the bottom of the Stolen 2020 Election in Arizona and standing up to the illegitimate Biden Regime.

Arizona needs a tough warrior like Kari Lake to secure its elections and wide-open southern border using the 10th Amendment.