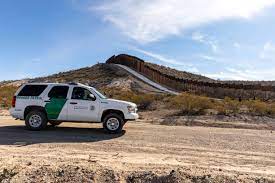 Our farm was situated on the Rio Grande, so we irrigated our fields from water taken from the river. When we would drive down to the river to fix our irrigation pump, we could see Mexico and would oftentimes wave at people on the Mexican side.

The Border Patrol had the legal authority to trespass onto our farm whenever it wanted. No search warrant was required. They could drive their vehicles all over our farm, and there was nothing we could do to stop them. They never demanded to search our house, but they could have if they had wanted to. If we put a lock on our gate and did not give them a key, they would shoot off the lock and then enter our property.

A few months ago, I returned to Laredo and, along with relatives and friends, visited the place where our farm had been located. Today, it is a fully developed residential area. We drove to the river. The lower pasture is now a park owned and operated by the city. When we arrived, we saw two Border Patrol vans with agents eyeing the Rio Grande, undoubtedly looking for immigrants crossing the river and illegally entering the United States.

Everyone in South Texas familiar with ranch culture knows that there is an unwritten rule that one should always leave gates to pastures the way he found them. That is, if a gate is open, you leave it open. If it's closed, you leave it closed. When I was in high school, I often heard of instances in which the Border Patrol would enter onto ranches and violate that unwritten rule, usually by leaving gates open that had been closed. Ranchers would complain, but usually the Border Patrol would arrogantly ignore them. There was nothing the ranchers could do about it.