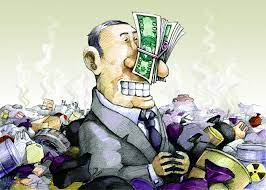 In fact, to prove that point, Ukraine was home to several shady 'business deals' involving President Joe Biden's corrupt son, Hunter Biden; he served as a 'board member' at the energy conglomerate Burisma for years and made millions of dollars, even as the company should have been investigated.

But since the invasion, the U.S. and the Western globalist cabal has chosen a side — that of Ukraine — and as such pumped tens of billions of dollars worth of military equipment, arms and money into the corrupt den of Kyiv, as though we learned absolutely nothing from doing the same thing in Afghanistan, which was a money pit.

According to a press release from USAID, American taxpayers are now picking up the cost of salaries for Ukraine's corrupt government:

The United States, through the U.S. Agency for International Development (USAID) in coordination with the U.S. Department of the Treasury, is providing an additional $4.5 billion in direct budgetary support to the Government of Ukraine to help alleviate the acute budget deficit caused by Putin's brutal war of aggression.

Say Only What We Want to Hear, or We Will Take Away Your Livelihood