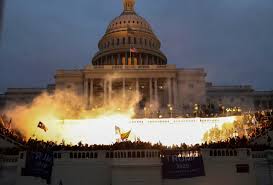 The headlines at the time were unambiguous in their assertions that the riot was a coup or attempted coup. For example, the riot was "A Very American Coup" according to a headline at the New Republic. "This Is a Coup" insists a writer at Foreign Policy. The Atlantic presented photos purported to be "Scenes from an American Coup."