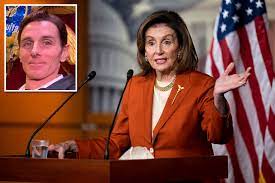 The Gateway Pundit broke the story over the weekend that Paul Pelosi, Jr. was seen with his mom on her recent trip to Asia.

TGP also noted on Monday that Pelosi held many meetings with her son and she also held a secret meeting with the 9th largest company in the world in Taiwan that was not on her itinerary.

As we noted last night:

TGP reported over the weekend that corrupt Democrat Speaker Nancy Pelosi traveled to Asia last week and brought along her son, Paul Pelosi Jr.  Based on this and other actions we questioned if the purpose of Pelosi's trip was to increase her family's portfolio rather than represent her country.

Pelosi didn't care if she started WWIII.  China was reportedly upset with her visit to Taiwan but in reality, as President Trump noted in his speech at CPAC Texas this past weekend, Pelosi actually gave China an excuse to invade Taiwan while blaming it on Pelosi.

Pelosi's meeting that wasn't on her itinerary was with TSM, which is a huge chip maker and the world's 9th largest company by market cap.

Today Pelosi confirmed that her son was with her on the trip.  She said his role was that of her escort.  She then said that of course her son did not have any business dealings when in Asia.