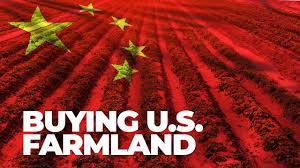 While some 14 states have restrictions against foreign ownership of land, there are no federal restraints regarding private U.S. agricultural land that can be foreign-owned, they said.

"Chinese investments in American farmland put our food security at risk and provide opportunities for Chinese espionage against our military bases and critical infrastructure. Instead of allowing these purchases, the U.S. government must bar the Communist Party from purchasing our land," Cotton said in a statement last week.

Allowing the CCP to purchase U.S. farmland, Tuberville said, is tantamount to "giving our top adversary a foot in the door to purchase land in the United States and undermine our national security."