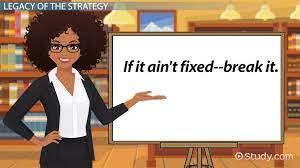 Flooding the system was the Cloward and Piven strategy to bring down this country. Create real or phony problems that "require" government actions that begin the process of shifting freedoms from individuals to the State. (For a more layman's insight, see here.)

Rahm Emmanuel, President Obama's Chief of Staff, said that "no good crisis should ever go to waste." That implied an opening for more government, a Cloward and Piven (CP) opportunity. (To visualize one asserted implementation of this, involving Acorn, see here.)

The strategy is not a Democrat monopoly. Republicans use it also, although do not brag about it or depend upon it almost exclusively.

The process is like rust eroding liberty, slowly and steadily. It replaces freedom with dependency and controls.

There are two problems with the strategy:

It must be slow and steady (boil the frog beginning with unheated water, slowly increasing the temperature [a wonderful metaphor but physically erroneous] so that the frog doesn't notice until it is too late).

It must be stealth, that is citizen "frogs" must not realize what is happening.

Biden: 'Pandemic Is Over' Just In Time For Elections!