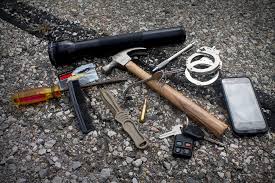 Although the concept of using improvised weapons for personal protection is far from new, it has taken on a whole new meaning during the past few years. After the tragic events of September 11th and incidents like the shootings at Columbine and Virginia Tech, the carry of purpose-designed weapons has become much more restricted and the number of "non-permissive" environments (where weapons are totally forbidden) has increased tremendously.

From a functional standpoint, we all know that these prohibitions have no real effect on stopping violent crimes. Laws only affect the law-abiding. If a criminal or terrorist chooses to bring a weapon into an environment where they're forbidden, he becomes the only one in that environment who's armed and the rest of us are forced to operate at a serious disadvantage.

Fortunately, like beauty, weaponry is in the eye of the beholder. The ability to recognize and apply practical, functional improvised weapons can ensure that you always have a capable defensive tool available no matter where you are.

The first step in understanding the selection and use of improvised weapons is understanding and accepting the fact that the real goal of self-defense is to physically disable your attacker or hurt him badly enough to make him stop trying to hurt you — stopping power. You also need to accept that tactics and actions that don't authoritatively support this goal are a waste of time and are at best distractions, not fight-stopping techniques. As such, separating effective, reliable tactics from misguided, ineffective ones is a key element of effective improvised weapon use.