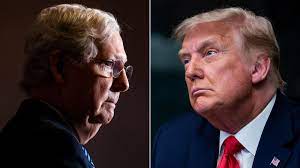 "The country deserves a thorough and immediate explanation of what led to the events of Monday," said McConnell. "Attorney General Garland and the Department of Justice should already have provided answers to the American people and must do so immediately."

This comes after he initially refused to comment on the warrant during a trip surveying flood damage in Kentucky.

It also comes as several other Republicans, including Reps. Paul Gosar (R-AZ) and Marjorie Taylor Greene (R-GA), have called for eliminating or defunding the FBI in retaliation for the investigation, and as Trump supporters online fantasize about starting a civil war.

The investigation is focusing on classified information the former president removed when he and his associates left the White House.

According to the Wall Street Journal, FBI agents seized 10 boxes of documents as part of the warrant.