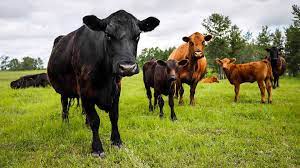 Farmison & Co has issued the stark warning as the nation's cattle farmers faces unprecedented pressures due to rising costs.

One of the firm's long-term beef suppliers, David Harrison from Grewelthorpe, said that for the first time in his life, he would get more money for selling a cow at auction for slaughter rather than for breeding.

John Pallagi, CEO of Farmison & Co, said it was a "remarkable and potentially devastating development".

"If it continues then up and down the country, farmers and producers will be incentivised to sell off their breading stock for meat, never to calve again.

"It speaks to the huge and risings costs involved in farming right now that the long-term prospects of making a profit on new members of the herd are becoming more remote, and producers are simply selling up. It is unprecedented in modern times."

The Joy of Raising Sheep

American Farmers Warn of Severe Food Shortages Beyond Their Control