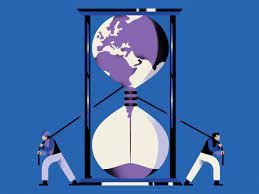 Now pipeline inflation pressures are 'only' 9.8% and 5.8% y-o-y, respectively. Even so, the market's fad for "sic transitory gloria mundi" faded yesterday, with stocks failing to hold gains, and US 10-year yields up 11bp on the session and 16bp from their intra-day low.

This was arguably because oil prices rose sharply again, Brent up 2% on the day and briefly back above the psychological $100 level, after EIA data showed US gasoline demand was higher than thought (no!) and inventories are worryingly low (no!) As noted yesterday, all it will now take is the SPR being refilled just before the mid-term elections (no!), and we flip into an energy price reversal (i.e., upwards) just ahead of winter.

Meanwhile, French and German wholesale electricity prices already continue to hit terrifying new highs daily, and while EU gas shortages might be avoided this winter, it will only be at a very high price.

In the UK, based on Bank of England (BOE) forecasts, energy bills will soon be equivalent to two full months of average take-home pay. The Guardian says Chancellor Zahawi has told firms they must "invest their "extraordinary" profits or face the threat of further taxation."; and the Trade Union Congress has called for the government to cancel the October energy price cap rise, saying the cost of living crisis this winter is an "emergency of pandemic scale". UK Treasury officials are apparently considering extending the new windfall tax on oil and gas companies to electricity generation. Former PM Brown is calling for the temporary nationalization of energy providers in some circumstances. This is as the most likely next PM is being backed by outright Austrian economists who want to change how the BOE works to stop artificially lowering rates and zombifying the economy.