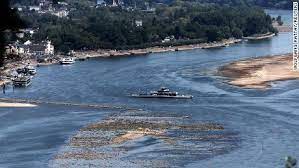 "About 160 million tons of goods and commodities were hauled along the Rhine in 2020, ranging from chemicals to iron ore to oil products. Low water levels restrict the transport of goods along the waterway by limiting how much barges can carry without scraping against the riverbed," Bloomberg said.

Update (0900ET): The water level on the Rhine River at Kaub, Germany, a key point on the inland waterway west of Frankfurt, is one centimeter (.40 inches) from breaching 40 centimeters (15.7 inches), which below that level could severely impact barge shipments.

Toril Bosoni, head of the IEA's oil market division, said the Rhine's low water crisis would remain a problem through the end of the year, making it very challenging for landlocked countries in central and eastern Europe to receive crude product deliveries via barges.

On Friday morning, water levels at Kaub were 41 centimeters (16.15 inches), with new estimates from the German Federal Waterways and Shipping Administration indicating the level could drop even further by the end of the weekend or early next week to 33 centimeters (12.9 inches).

Barges have been hauling "significantly less" goods -- including crude oil and coal, but still can transit the waterway, German newspaper Frankfurter Allgemeine Sonntagszeitung said, citing an interview with the head of Federal Waterways and Shipping Administration Hans-Heinrich Witte.

Paul Joseph Watson – This shocked even me.