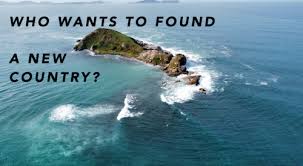 But that's a tall order.

There have been a number or projects and concepts which tried to gain various levels of autonomy.

In the early 70s, Operation Atlantis intended to gather libertarians, sail out to international waters, and declare sovereignty. They built a boat out of rebar and concrete, and it sank into the Hudson. They revived it, and managed to bring it all the way down to the Bahamas… where it sank again.

More recently a couple projects in Chile named after an Ayn Rand character fell apart before they began. And those weren't even special jurisdictions that could set their own tax rates and business regulations, for example. They were essentially just meant to be intentional communities with likeminded people come together to learn and produce.

One appeared to be a legit scam, and the other was abandoned due to the political situation in Chile.

Chile had a lot going for it, but then elected extreme socialists who are rewriting the Constitution, and went mental over Covid… so it turned out not to be the best location for those looking for freedom.