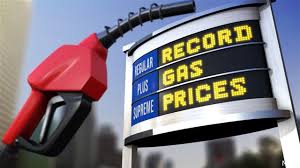 On Thursday's edition of NPR's "Here & Now," Bloomberg News Senior Editor Mike Regan said that one factor in the declines in oil and gas prices is the fact that consumers reacted to high gas prices by buying less gas, "and I think we're seeing a lot of that." And noted that gas deliveries are lower than they were this time in 2020.

Regan said there are global factors at play, and "If you look at it from the supply side, obviously, the war in Ukraine has gone on so long that other sources are starting to offset that shunned oil from Russia. For example, the U.S. has obviously released a lot of oil from its strategic reserve and OPEC producers have agreed to pump more. Obviously, they're not pumping as much as many people would like them to. But they have increased production."

He continued, "And then on the demand side, consumers basically reacted by buying less gas, and I think we're seeing a lot of that."

Later, co-host Scott Tong asked, "[T]here is this idea of demand destruction, that is when prices are sky-high for a long time, it can change consumer behavior in the long term. I might, for instance, sell my car or move closer to a subway stop. Any sign of that?"

Regan responded, "I think there is definitely a sign of that. Deliveries of gas have actually dropped below the level from this time of year in 2020. … And there [are] sort of a few different things people are pointing at." Regan then talked about vehicles becoming more efficient but also noted that demand destruction could come from the economy slowing.