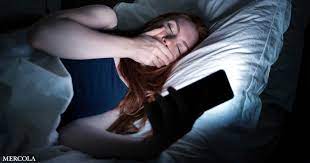 It was only about 130 years ago that electric light was invented,1 bringing with it drastic changes in the way humans function on a daily basis.

Now that we're able to work, eat and play well after the sun sets, artificial lighting has had immense benefits for us, but our endogenous circadian clocks haven't fully adjusted. The fact is, exposure to unnatural electric light, including light at night (LAN), disrupts sleep and many other biological processes.

The full effects of exposure to light at night are only beginning to be understood, but a powerful study has demonstrated that exposure to any amount of light at night has detrimental effects on the health of older adults, increasing the risk of obesity, high blood pressure and diabetes.2

Exposure to Light at Night Raises Risk of Chronic Disease

Since the beginning of time, humans were exposed to light from sunlight during the day and near complete darkness at night, except for light from the moon, stars and fire. Now, it's difficult for humans to avoid light exposure at night, which comes from television, computers, cellphones, light pollution and a multitude of other sources.