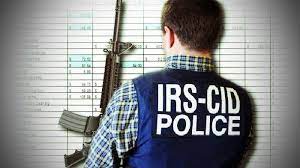 The job listing also called for being willing to "participate in arrests, execution of search warrants and other dangerous assignments." The IRS has stockpiled 5 million rounds of ammunition and thousands of guns.

Republican US Representative Matt Gaetz introduced the Disarm the IRS Act that would prevent the agency weaponizing the agency against Americans. Democrats are not against guns, they are against law abiding Americans having guns to defend themselves as leftists defund police and weaponize government workers.

As a Special Agent you will combine your accounting skills with law enforcement skills to investigate financial crimes. Special Agents are duly sworn law enforcement officers who are trained to "follow the money." No matter what the source, all income earned, both legal and illegal, has the potential of becoming involved in crimes which fall within the investigative jurisdiction of the IRS Criminal Investigation. Because of the expertise required to conduct these complex financial investigations, IRS Special Agents are considered the premier financial investigators for the Federal government.