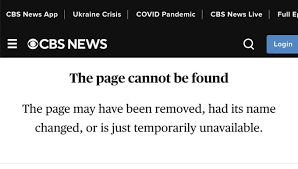 CBS News has sensationally censored its own documentary after the film exposed how only 30% of weapons funding provided by the US makes it to the front lines.

A tweeted posted by CBS on Friday promoted its new film 'Arming Ukraine' by explaining that the documentary "explores why much of the billions of dollars of military aid that the U.S. is sending to Ukraine doesn't make it to the front lines: "Like 30% of it reaches its final destination."In the documentary, experts told CBS they had no idea where most of the weaponry was going.

Republican lawmakers explained how they felt vindicated by the revelation, having previously opposed a $40 billion Ukraine aid package.

"This [is] one of the reasons I voted 'no,'" US Representative Marjorie Taylor Greene (R-Georgia) tweeted in response to the CBS report.

"Flooding a country with advanced weapons can have grave consequences, even when done with the best of intentions," CBS's description of the documentary read. "This CBS Reports documentary goes inside Ukraine to get a firsthand look at how military aid gets from the border to frontline soldiers, and explores the difficulties of getting the aid to the fighters who need it."

However, the film has now been completely removed from the CBS website, with a 'page not found' label in its place.