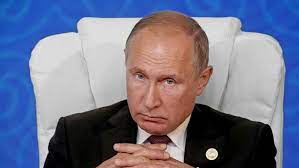 "I would like to mention the legislative initiative currently being discussed in Congress to declare Russia a 'country sponsor of terrorism.' If passed, it would mean that Washington would have to cross the point of no return, with the most serious collateral damage to bilateral diplomatic relations, up to their lowering or even breaking them off. The US side has been warned."

Senators Lindsey Graham (R-SC) and Richard Blumenthal (D-CT) have been leading an effort to pressure the Biden administration into making the terror designation, which would allow new categories of sanctions. The are only four designated countries today: Cuba, North Korea, Iran and Syria.

On July 28, the Senate passed a non-binding resolution calling on Secretary of State Antony Blinken to designate the Russian Federation as a state sponsor of terrorism. At the time, Graham said this about a potential designation:

"It means that doing business with Russia with that designation gets to be exceedingly hard – it has secondary effect sanctions, it would limit dual export items, and more importantly it would waive sovereign immunity when it came to suing Russia in U.S. courts. This designation would be a nightmare for Russia."