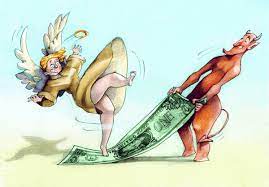 The human brain has trouble understanding something so huge. So let me try to put it into perspective.

If you earned $1 per second, it would take 11 days to make a million dollars.

If you earned $1 per second, it would take 31 and a half years to make a billion dollars.

And if you earned $1 per second, it would take 31,688 years to make a trillion dollars.

So that's how enormous a trillion is.

When politicians carelessly spend and print money measured in the trillions, you are in dangerous territory.

And that is precisely what the Federal Reserve and the central banking system have enabled the US government to do.

From the start of the Covid hysteria until today, the Federal Reserve has printed more money than it has for the entire existence of the US.

For example, from the founding of the US, it took over 227 years to print its first $6 trillion. But in just a matter of months recently, the US government printed more than $6 trillion.

During that period, the US money supply increased by a whopping 41%.

In short, the Fed's actions amounted to the biggest monetary explosion that has ever occurred in the US.

Initially, the Fed and its apologists in the media assured the American people its actions wouldn't cause severe price increases. But unfortunately, it didn't take long to prove that absurd assertion false.

"We're Living In Alice In Wonderland" -

How the Federal Reserve Bought Support for Lockdowns

The Fed Is Aiding the Democrat's Coup