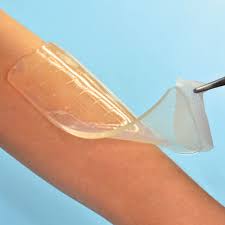 This isn't a problem with an experimental new wound dressing however, which uses ultrasound-induced microbubbles to better bond with the skin.

Developed by a team led by Canada's McGill University, the dressing itself takes the form of a thin sheet of clear hydrogel – it's made of either polyacrylamide or poly(N-isopropylacrylamide) polymers, along with seaweed-derived alginate gel. That hydrogel is combined with a liquid primer containing chitosan or gelatin nanoparticles, or cellulose nanocrystals.

Whatever the combination, once the primer and hydrogel have been applied to the wound, a small ultrasound transducer is brought into contact with them. The ultrasound waves travel through the hydrogel and induce cavitation in the primer, producing many microbubbles which push the primer molecules down into the skin.

As a result, the dressing sticks to the skin much better than a traditional adhesive-backed bandage – the greater the intensity of the ultrasound, the better the dressing sticks. And once the wound has healed, the bonding process can be reversed, to remove the hydrogel.

Along with its use for wound treatment, it is believed that the technology could also be utilized to deliver medication through the skin … and the possibilities don't stop there.