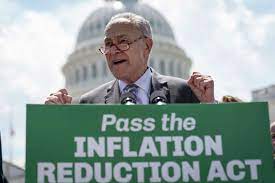 Proponents of this bill say it will increase the federal government's revenue by $739 billion by adding a 15% corporate minimum tax, prescription drug pricing reform, IRS tax enforcement, and closing the carried interest loophole. This bill will also invest in clean energy and healthcare to the tune of $433 billion. So, if the Senate Democrats have done their math correctly, this bill should reduce the deficit by at least $300 billion over the next ten years.

But should we take the Inflation Reduction Act at face value?

Let's look at what's in the bill, why it's called "Inflation Reduction," and how we should plan for the future if it passes.

If you want to read this 730-page monster of a bill, you can do so here. Alternatively, if you would prefer the 1-page summary issued by the Senate Democrats, you can find it here. There is a more detailed, but at 37 pages much more readable, summary of the tax provisions outlined by the Congressional Research Service here.

Democrats claim that much of the bill's income will come from adding a 15% corporate minimum tax to corporations posting an average of at least $1 billion per year for the past three years. It's well known that many large corporations pay less than 10% (and some less than 5%).