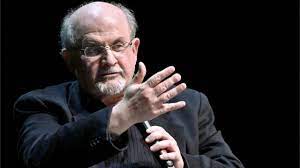 The 75-year-old author, who was born in India and has British and American citizenship, was stabbed repeatedly by an assailant named as Hadi Matar while giving an interview before a live audience at the Chautauqua Institution on Friday.

"Salman will likely lose one eye; the nerves in his arm were severed; and his liver was stabbed and damaged," his agent, Andrew Wylie, has said in a statement quoted by the BBC, adding that he is currently on a ventilator and unable to speak.

While a motive for the attack has yet to be disclosed by the authorities, who have said Rushdie was stabbed at least once in the neck and once in the abdomen, radical Muslims have been baying for the author's blood since the publication of his book The Satanic Verses in the 1980s, which included fictionalised interpretations of the life of the Islamic prophet regarded as blasphemous.

Indeed, the Ayatollah Khomeini, then-Supreme Leader of the Islamic Republic of Iran, issued an Islamic fatwa calling for the murder of Rushdie and his publishers in 1989 and put a bounty on his head, which has been raised several times over the years and is now worth millions of dollars.

A number of people connected to The Satanic Verses have indeed been killed or seriously injured before now — its Italian translator, Ettore Capriolo, was stabbed multiple times in the chest, neck, and hands at his home in Milan by an assailant he described as Iranian in 1991, and its Japanese translator, Tsukuba University professor Hitoshi Igarashi, was found stabbed to death on his Tokyo campus days later.