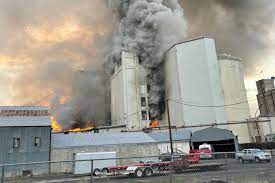 Authorities are describing the Grain Craft mill in Pendleton as a total loss after a small fire that began on Tuesday afternoon reignited early Wednesday morning while the building was empty, fully engulfing the mill due to the significant amount of dry grain it was housing as well as its wood structure.

Pendleton Assistant Fire Chief Tony Pierotti told the media that the fuel load was "extreme" because the silos were filled with finished grain.

Authorities have been keeping the area clear in anticipation of the potential collapse of the building, which is more than 100 years old, as well as the amount of slow-burning grain. The mill is surrounded by the county courthouse as well as businesses and homes.

The fire was reportedly caused by mechanical failure that may be related to a sifter's filter. Police Chief Charles Byram said: "It happened in the mill itself, with one of the pieces of equipment, with a rubber bushing or housing that obviously got too hot and started the fire."

There were no injuries, but some buildings in the immediate area sustained smoke and water damage. The mill had been processing a significant amount of flour as the fire occurred right in the middle of harvest season.

American Farmers Warn of Severe Food Shortages Beyond Their Control