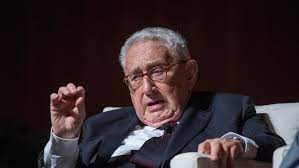 Mr. Kissinger sees today's world as verging on a dangerous disequilibrium. "We are at the edge of war with Russia and China on issues which we partly created, without any concept of how this is going to end or what it's supposed to lead to," he says. Could the U.S. manage the two adversaries by triangulating between them, as during the Nixon years? He offers no simple prescription. "You can't just now say we're going to split them off and turn them against each other. All you can do is not to accelerate the tensions and to create options, and for that you have to have some purpose."

On the question of Taiwan, Mr. Kissinger worries that the U.S. and China are maneuvering toward a crisis, and he counsels steadiness on Washington's part. "The policy that was carried out by both parties has produced and allowed the progress of Taiwan into an autonomous democratic entity and has preserved peace between China and the U.S. for 50 years," he says. "One should be very careful, therefore, in measures that seem to change the basic structure."

Mr. Kissinger courted controversy earlier this year by suggesting that incautious policies on the part of the U.S. and NATO may have touched off the crisis in Ukraine. He sees no choice but to take Vladimir Putin's stated security concerns seriously and believes that it was a mistake for NATO to signal to Ukraine that it might eventually join the alliance: "I thought that Poland—all the traditional Western countries that have been part of Western history—were logical members of NATO," he says. But Ukraine, in his view, is a collection of territories once appended to Russia, which Russians see as their own, even though "some Ukrainians" do not. Stability would be better served by its acting as a buffer between Russia and the West: "I was in favor of the full independence of Ukraine, but I thought its best role was something like Finland."