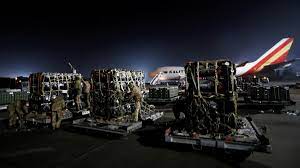 As I wrote back then:

The entire defense budget of Ukraine before the war was just under $6 billion. How can Ukraine possibly absorb (mostly) military "aid" that represents NINE TIMES their annual defense budget? It simply can't be done…

From a military perspective, the gusher of money and equipment being sent to Ukraine makes little sense because there's no way Ukraine has the infrastructure to absorb it and use it effectively. The US approach seems to be to flood the zone with weaponry and assorted equipment of all sorts, irrespective of how it might be used or where it might ultimately end up. I can't see how all this lethal "aid" will stay in the hands of troops and out of the hands of various criminal networks and black markets.
And so it goes. Recent reports suggest that only 30-40% of US military aid is actually reaching Ukrainian troops. The rest is being siphoned off, lost, stolen, what-have-you. The response in US media is to suppress this truth, per dictates from Ukraine!

Caitlin Johnstone does an excellent job of summarizing the case, and since she generously encourages her readers to share her posts, I thought I'd avail myself of her generosity. Without further ado:
Caitlin Johnstone, CBS Tries Critical Journalism; Stops After Ukraine Objects

Following objections from the Ukrainian government, CBS News has removed a short documentary which had reported concerns from numerous sources that a large amount of the supplies being sent to Ukraine aren't making it to the front lines.

Could the War in Ukraine Have Been Stopped?

Ukrainians Liberated from the Scourge of Nazism Yearn to Join Russia