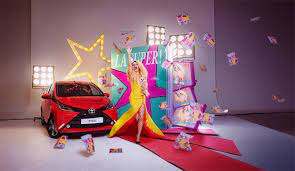 Today, we have Out With Chevy – which wasn't about the latest Chevy. And – just recently – Models of Pride – the "world's largest free conference of LGBTQ+ youth and their allies" – sponsored in part by a car company – Toyota – which reportedly gifts more than $100,000 annually to the Los Angeles LGBT Center, which put on the freak show.

One of them on show being Dew Mi Moore – a "drag performer" who goes from zero to freak in less than six seconds. Also present was Mayhem Miller, who told the kids brought there by their parents, "When I was young, we didn't have anything like this. . ." Probably because parents didn't used to bring their kids to "drag races."

The event also included a workshop instructing kids about the "first steps" they can take toward becoming freaks themselves.

The same language that's necessary to use when speaking of Face Diapers rather than "masks" – and the freaks pushing those, too.