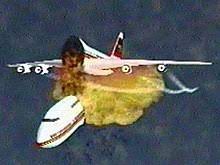 The official story surrounding the tragic crash of Trans World Airlines (TWA) Flight 800 back on July 17, 1996, maintains that the airplane just "exploded" out of nowhere, and that there was no terroristic foul play. However, William Henry Teele III, a 10-year Navy veteran-turned-whistleblower, offers a different version of events that pegs the United States military as the culprit.

Though not intentional, according to Teele's account, several U.S. Navy vessels were in the area at the time. And one of them launched a missile that struck TWA 800 and sent it plunging into the sea off the coast of Long Island, N.Y.

Jack Cashill from American Thinker wrote a book about all this back in 2016. He published an article the other day stating that he believes Teele's account to be legitimate, based on who he is and his presence on one of the ships in the fleet that witnessed the TWA 800 incident first-hand. (Related: We, too, published a report back in 2013 about other whistleblowers who exposed what they described as a coverup concerning the crash of TWA 800.)

"Teele did not claim to be on the ship that fired the missile," Cashill writes – you can read a more detailed account of Teele's background in Cashill's article about the subject.

"He was on the USS Carr, a guided missile frigate that was one of the 'combatants' in the battle group that destroyed the unfortunate 747 and killed the 230 souls on board. Everything that I could verify about Teele's account back then checked out."