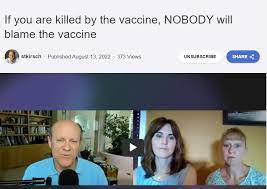 Medical examiners aren't assessing that the vaccines can cause death because they aren't doing the proper tests. They don't order the tests because they don't want to know.

The CDC isn't requesting that these tests be done either. They don't want to know.

Family members could request the tests be done on the tissue samples of those who are deceased. They don't want to know the truth either (it's too painful).

The doctors know the vaccine killed people, but they won't write it in the death certificate because they don't want to be fired, lose their hospital privileges, and lose their license to practice medicine. So they shut up too.

Here are two videos that provide evidence in great detail about all of this corruption. It's truly astonishing.

NOBODY WANTS TO TALK ABOUT IT.

He also wrote me:

On section II.2 I would also consider TLR4 stains on heart microscopic slides. I would also add a SARS cov2 nucleocapsid antibody test to all microscopic tissue sections where spike is found to verify damage by viral infection vs vaccine tissue damage.

So this is what the medical examiners should be doing.

How many are doing it? One.

Declaration Of International Medical Crisis Due To Death And Diseases -

Covid vaccinations now PROHIBITED in people under 50 in Denmark