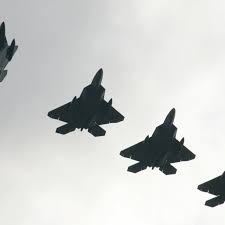 "Given the success of the pod in training and demonstrated ability to be reprogrammed, Air Combat Command recommended four pods be converted into combat pods to provide attack capabilities against enemy radio frequency threat systems, instead of simulating them," reads the announcement.

Electronic warfare is a crucial part of modern armed conflict. It involves, broadly, the transmission and obstruction of signals along the electromagnetic spectrum, primarily but not exclusively in the domain of radio waves. These signals are used for communication between pilots; with radar to perceive the location of enemies beyond visual sight; and for weapons guidance. If one side can block the signals of the other side, it can potentially prevent their pilots from communicating, their radar from perceiving, and their weapons from following radar guidance.

The Angry Kitten was developed by the Georgia Tech Research Institute to simulate the electronic warfare devices of other country's aircraft, the kind that the Air Force might encounter in the sky. It is a system that incorporates a software-defined radio, meaning its signal and frequencies can be changed by code. This is in contrast to traditional hardware-defined radio, which is limited by what frequencies the physical components can produce and receive.