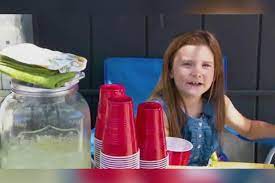 "It's fun and you get lots of people," Asa told FOX 8 news in an interview, adding that lots of truckers stop buy and pay more than the $1 per cup that she charges.

"Especially on a country road, I get a lot of people," she said.

Unfortunately for Asa, however, her summer of entrepreneurial spirit would come to a grinding halt when police shut down her stand for the crime of selling lemonade without a permit.

Earlier this month, Asa had her first experience with the state's iron fist when she set up her stand at her father's business downtown. Everything was cleared with the property owner and she had permission to be there during the town's annual Rib and Food Festival.

Asa was in an alleyway about a half block from the festival and business was good — until police showed up.

Asa says when she saw a police officer walking up to her stand she thought he was going to buy a cup of lemonade. But that was not his mission. Instead of encouraging the little girl's business acumen in the lemonade realm, he was there to shut her down.