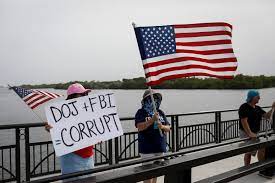 More evidence that the FBI is rotten to the core was revealed over the weekend following the agency's politicized raid on former President Donald Trump's Mar-a-Lago estate, proving once again how scared the deep state is that he will win the Oval Office again in 2024.

According to a report from CBS News, the FBI and the Department of Homeland Security appear to be laying the groundwork for a major false flag attack, with the outlet noting that both agencies are claiming that threats against them and their personnel have dramatically gone up since the Biden regime's raid.

"The FBI and DHS have observed an increase in threats to federal law enforcement and, to a lesser extent, other law enforcement and government officials following the FBI's recent execution of a search warrant in Palm Beach, Florida," says a joint bulletin. "These threats are occurring primarily online and across multiple platforms, including social media sites, web forums, video sharing platforms, and image boards. The FBI and DHS would like to ensure that law enforcement, court, and government personnel are aware of the range of threats and criminal and violent incidents."