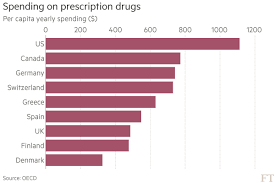 Compared to every other developed nation that is a member of the Organization for Economic Cooperation and Development (OECD), the United States spends substantially more on pharmaceutical drugs, making it the number-one most drug-addicted country in the world.

After accounting for purchasing power parity, the average American spent $1,376 on pharmaceuticals in 2019, a figure 47 percent higher than Germany, the second-most drug addicted country in the world – followed by Canada, Japan, Australia and France.

The OCED average is $571 per person, per year, for pharmaceuticals, which is just a fraction of what the average American spends. All in all, the average American buys 250 percent more drugs every year compared to the average non-American. (Related: America is the most expensive place for healthcare but is dead last as far as life expectancy goes.)

Conversely, Mexico and Costa Rica are at the bottom of the OCED list for pharmaceutical spending, along with several Eastern European and Nordic countries.

Big Pharma Stocks TANK After Biden Says Pandemic Is Over