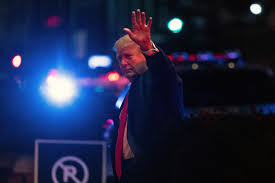 Eric Trump is putting the FBI on notice regarding the weaponized agency's raid on President Donald Trump's home in Florida: the officers who were there were recorded.

Eric Trump, the president's son, in an interview with Sean Hannity, confirmed that "We will be releasing the video surveillance footage when the time is right."

He also confirmed that FBI agents had asked for Mar-a-Lago's surveillance cameras to be turned off, which staff members at the president's home refused to do.

Eric Trump pointed out how insisting that cameras be turned off flies in the face of the concept of transparency in law enforcement.

The raid was carried out last week when President Trump was not at home. It purportedly was to reclaim government documents from Trump, who confirmed he had been working with federal agents on the long procedure of sorting through documents and determining where they should be.

In fact, federal agents had visited Mar-a-Lago weeks earlier, and their request at that time was to put a better lock on the room where Trump's presidential documents were stored.

The raid was completely out of the ordinary, as document issues with prior government officials, including Hillary Clinton, were handled through lawyers and administratively.

Critics of the Democratic agenda against Trump say it's just the latest attempt by Democrats to find some way to keep him from running for office in 2024. After all, he's the leading GOP contender at this point, although he's not announced yet.