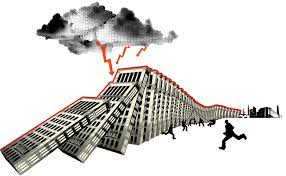 Last week we got confirmation that according to the traditional definition of a recession—two quarters of negative growth—we are already in a recession.

The response from this administration has been denial and word games rather than actually trying to stop the slide. At which point the betting shifts to whether it'll be a shallow 1991-style recession or a big, 2008-style one, perhaps with a financial crisis to spice things up.

Bigger-picture, what we're seeing is a concentrated version of the world that paper money delivers: an endless series of booms, busts, and financial crises, all to sustain a permanent siphon of the peoples' wealth towards subsidizing federal deficits and Wall Street-brokered leverage. Millions are waking up to what fiat money does, which could be bullish for Bitcoin in the long run.

First, the GDP numbers. Going by the Bureau of Economic Analysis (BEA), real GDP shrank at an annualized rate of 1.6% in Q1 and then dropped another annualized 0.9% in this most recent Q2. GDP is revised several times through the quarter, so that could change for better or worse. Meanwhile, of course, if they're under-estimating inflation, as many believe, then the real decline could be much worse. Perhaps on the scale of a 3% annual drop in GDP.