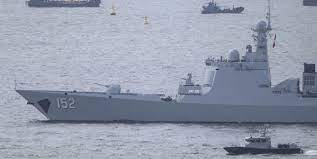 China is entirely capable of imposing a naval blockade on Taiwan, commander of the US Seventh Fleet, Vice Admiral Karl Thomas, acknowledged in an interview with The Wall Street Journal published on Monday.

"They have a very large navy, and if they want to bully and put ships around Taiwan, they very much can do that," the admiral said.

China has already created a large and modern navy, Thomas stated, with the number of military vessels at Beijing's disposal continuing to grow rapidly. The admiral said that he did not, however, know whether China is seeking to take any actual action against Taiwan, which Beijing regards as an integral part of its territory, whether through an all-out invasion or a naval blockade.

"Clearly, if they do something that's non-kinetic, which, you know, a blockade is less kinetic, then that allows the international community to weigh in and to work together on how we're going to solve that challenge," he explained.

Poland In Talks With US About Hosting Nuclear Weapons

Is It Time To Buy Gold?

"Be Afraid, Be Actually Afraid":

SEC Claims All of Ethereum Falls Under US Jurisdiction

Kiyosaki says silver could go to $500 - full analysis of metals, crypto and the DOLLAR

Kiyosaki says silver could go to $500 - full analysis of metals, crypto and the DOLLAR