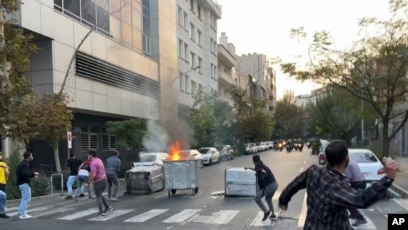 A fifth day of protests in Iran have resulted in multiple deaths amid a security crackdown, following the death last week of Mahsa Amini, a 22-year-old from Iranian Kurdistan who reportedly died due to being roughed up by police for "unsuitable attire" - or not conforming to Islamic Republic standards of a hijab.

Iranian officials say seven people have died since protests erupted Saturday, following Amini's funeral, where women began removing their headscarves in protest, sometimes burning them in public displays of defiance. Demonstrators have decried instances of what they say is 'live fire' tactics and deadly forced used by police to disperse the protests, which have now spread across several provinces.

At least one of the dead has been reported as a security member, coming also amid hundreds of arrests. "Crowds cheered when women burned their hijabs on a bonfire in Sari on Tuesday, the fifth successive day of unrest," BBC has reported of scenes coming from the country Tuesday. "Activists said a woman was among three protesters shot dead by security forces in Urmia, Piranshahr and Kermanshah."

Dozens of videos showing fierce anti-hijab protests, as well as chants against the country's 'morality police' have been circulating widely on the internet.