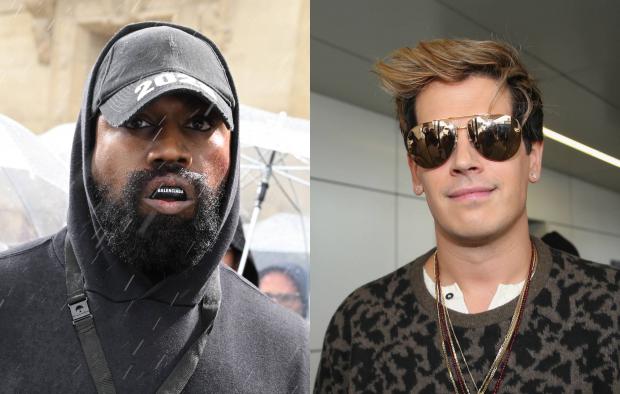 In a since-deleted video posted to Twitter by the account Patriot Takes, West, whose legal name is Ye, can be seen alongside conservative figure and former Breitbart editor, Milo Yiannopoulos.

"This is Milo right here, working on the campaign," West, 45, says in the video. "Is that an announcement?" one man asks West, to which he responds by laughing.

"I guess it is," he adds, to which a laughing Yiannopoulos replies, "Thanks, I accept."

Yiannopoulos announced earlier this year that he had been hired as an unpaid intern by Rep. Marjorie Taylor Greene (R-Ga.) in her congressional office. Greene's office also confirmed his hiring.

Yiannopoulos previously worked for Breitbart from 2014 but resigned in 2017 following backlash over comments he made in a video in which he stated that sex between 13-year-olds and older men can be "life-affirming," according to the New York Post.

Later, in the video of West posted on Sunday, the fashion designer can be seen holding up a pair of tracksuit bottoms branded with the words "Ye24."

"That's what I'm talking about," the rapper tells the cameraman.

"So you are running?" the cameraman then asks West, to which he responds, "Yes, simple."

"It's simple 'cause ain't [sic] nobody can tell me, you know, 'you should say this, you shouldn't say that,' you know? It's just we're moving towards the future," West adds.